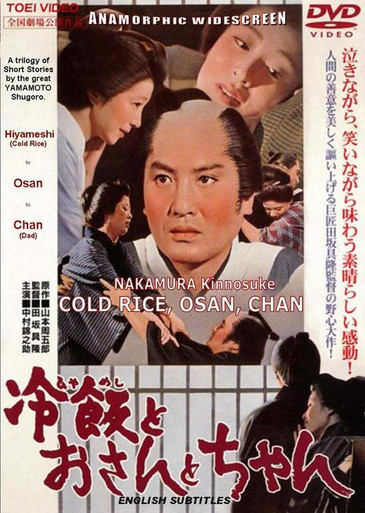 Superstar Nakamura Kinnosuke takes on three separate roles in three short stories by noted author Yamamoto Shugoro who wrote the novels that were adapted into Sanjuro, After The Rain, and the two Dojo Challenger movies, Samurai From Nowhere and Samurai From Somewhere..

Hiyameshi: A younger son of a modest family, often referred as "cold rice", strives to realize his dream of leading an independent life.  Too poor to form his own branch, he is relegated to hand me downs from his three older brothers and his collection of rare books having given up on marrying the girl of his dreams.

Osan: Carpenter Santa travels throughout Japan in search of his missing wife, whom he had left after she called out another man's name during climax.  His journey is complicated by when he encounters other men who may know where Osan is.

Chan: Driven to drink as times have changed and people no longer care about quality craftsmanship, poverty stricken brazier maker Jukichi must find ways to make money for his family.  Offers have come to join the more modern company started by former comrades, he tries to balance the pride of craftsmanship against his responsibility to support his family.