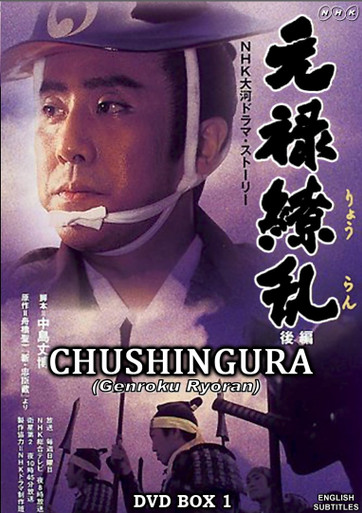 Ripped from the pages of Japanese history NHK’s 38th taiga drama “Chushingura” (Genroku Ryoran) is one of the most enduring and best loved stories from the Land of the Gods. Generations have grown up hearing the stirring tale of Ako clan’s chief councilor Oishi Kuranosuke who led his men through suffering and hardship to ultimately avenge their Lord Asano who had been unjustly forced to commit ritual suicide after drawing his sword and attacking the vile and corrupt Lord Kira Kozukenosuke in the shogun’s palace. Since both sides were to be held responsible for any dispute, Shogun Tsunayoshi’s letting Lord Kira off scot-free was an unforgivable offense. NHK pulled out all stops to produce this magnificent look at the most memorable event in Japanese history. Featuring an all-star cast this series is not to be missed!