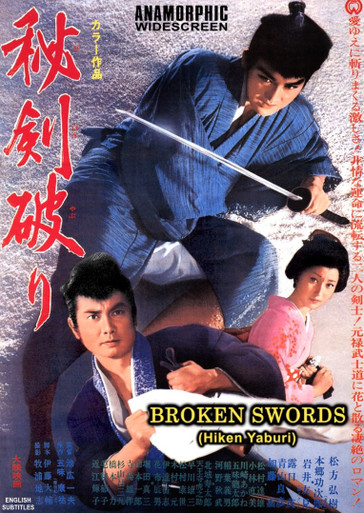 This re-make of SAMURAI VENDETTA tells the tragic, yet exciting story of the friendship between Nakayama Yasubei, a member of the 47 Ronin, and Tange Tenzen, a relative by marriage of the vile Lord Kira. The original version had paired Katsu Shintaro with Ichikawa Raizo in an extremely successful film which had helped springboard the 2 lead actors into their position as Daiei Films biggest stars. By 1969 though, Katsu had left to start his own production company, and Ichikawa had tragically died at a very young age. Seeking to fill the void left by Raizo’s death, Daiei was able to borrow Matsukata Hiroki from Toei to complete a group of movies originally written for the late mega-star and introduced Matsukata with this upgraded version of the familiar story. Matsukata Hiroki also replaced Raizo in both the Nemuri Kyoshiro (SON OF THE BLACK MASS) and SHINOBI NO MONO (NINJA, A BAND OF ASSASSINS) series as well as the final movie in the modern-day YOUNG BOSS series. Matsukata Hiroki's swordsmanship far outshines that of Ichikawa Raizo, giving this movie one of the greatest fight scenes of all time. An extraordinary film with an outstanding story and brilliant swordplay. This is a motion picture not to be missed!