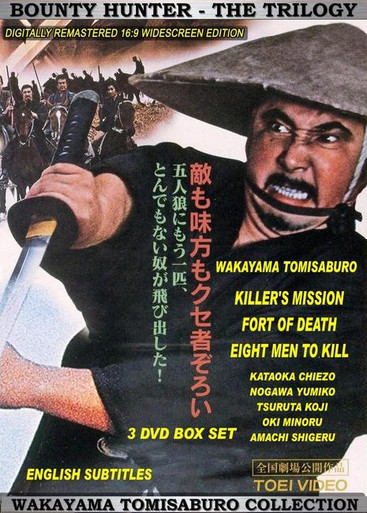 Shikoro Ichibei, the top secret agent answerable only to the shogun himself is sent to Satsuma in order to stop the illegal smuggling of modern Dutch firearms to the rebellious Satsuma clan. Along the way he must contend with a mysterious woman spy and the Satsuma clan’s finest swordsman played by the incomparable Kataoka Chiezo!

When a group of farmers ask for his help in their fight against a brutal daimyo, Shikoro Ichibei and a team of bounty hunters take up arms at a ramshackle old fort while teams of clan samurai lay siege to them in their efforts to quell the uprising.  Things turn deadly when one of the bounty hunters decides to turn traitor!

The theft of gold from Japan’s secret mines puts the nation in danger of going bankrupt and starting a revolution that may bring down the Tokugawa shogunate in bloody defeat.  Shikoro Ichibei, he only man who can find and punish the culprits is called upon to investigate when a dying man is found to have a gold coin in his stomach.  Can Ichibei defeat his greatest foe and save Japan from bloody devastation?