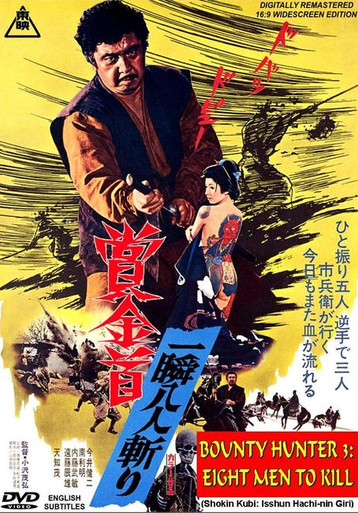 The theft of almost a half ton of gold from the shogunate’s official mine threatens to bankrupt the government of Japan.  Despite a desperate search the gold has not been found, causing officials of the Tokugawa ‘bakufu’ to call on their most skillful secret agent, Shikoro Ichibei.  This is the third and final chapter of the Shokin Kasegi (Bounty Hunter) series starring the peerless Wakayama Tomisaburo as a doctor who doubles as a bounty hunter with a vast array of weapons and the greatest sword skill in the land. The discovery of a gold coin in the belly of one of his patients provides the first clue to finding the stolen bullion and saving the nation.  Tremendous action scenes highlight this ultra-violent epic as the Land of the Rising Sun is suddenly plunged into darkness!