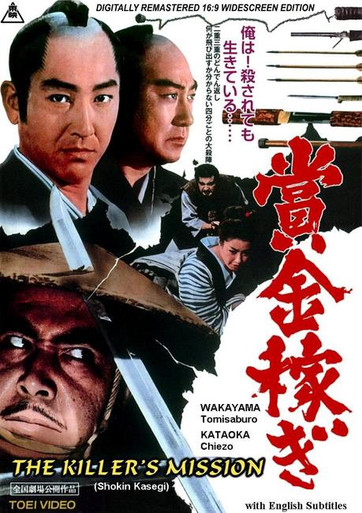 Before the "Baby Cart" series about the former shogun's decapitator traveling on the road to hell, catapulted him to international stardom, Wakayama Tomisaburo made a series of three films about the shogun's top troubleshooter, Shikoro Ichibei.  In 1751, the Dutch attempted to foment revolution by supplying the rebellious Satsuma clan of Kyushu with 1,000 of the most modern firearms of the age. The only one who can stop the sale of these terrifying weapons is Ichibei who is immediately dispatched to Kyushu along with a female who may or may not be his ally. With longtime screen legend Kataoka Chiezo as a Satsuma official working within the clan to help stop civil war, the action heats up and Ichibei must draw his sword time and time again in order to survive.  And what will happen when these two powerful warriors are forced to cross swords?  Who will survive this battle of giants in the world of Japanese cinema?