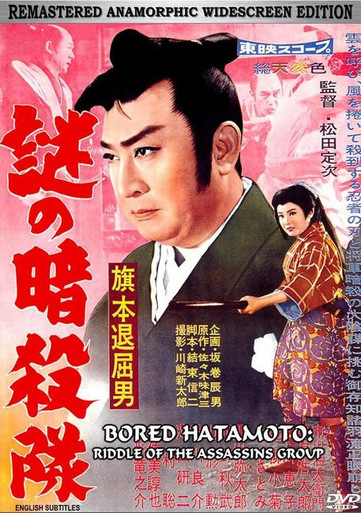 The epic tales of Saotome Mondonosuke, the ”Bored Hatamoto” were told in over 25 films. As a hatamoto (bannerman, or direct retainer of the shogun) Mondonosuke has a crescent scar on his forehead, which is a license to go above the law in order to protect the shogunate. In this exciting entry in the series, a vicious plot using ninja to curse the shogun leads to a showdown with the Owari clan, one of the 3 branch families of the Tokugawa. Will Mondonosuke be able to discover who is behind the conspiracy in time to save His Excellency from a hideous death? Starring the great Ichikawa Utaemon in his signature role, this film is a high point in the long-running series.