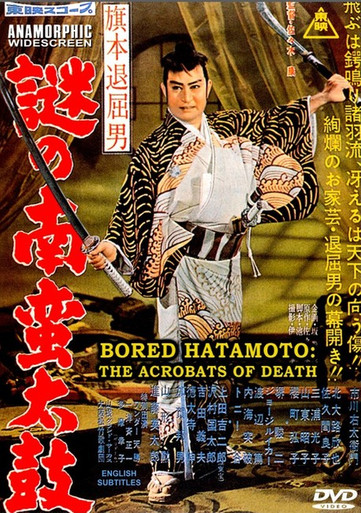 Directed by:  MATSUDA Sadatsugu
IN STOCK READY FOR IMMEDIATE SHIPPING

Directed by:  SASAKI Yasushi
During the reign of 5th Shogun Tokugawa Tsuneyoshi a troupe of Chinese acrobats travel to Japan to help celebrate the building of the Yushima Shrine.
At the same time a series of mysterious assassinations take place with a strange and unknown weapon. Master swordsman Saotome Mondonosuke, a 'Hatamoto' (direct retainer of the shogun) and a man who loves action takes it upon himself to get to the bottom of the mystery and and solve the puzzling crimes. Could the visitors have anything to do with it, or is this the case of a major frame-up being carried out by those who would take over the shogunate themselves? One of the most popular and intriguing characters in Japanese cinema, Mondonosuke, who sports a ’crescent shaped scar' on his forehead that signifies his right to kill in the name of the shogun faces one of his most
dangerous enemies in this exciting entry in the series.
============================================