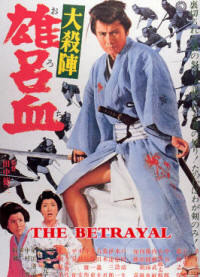 This tale of betrayal and revenge features one of the greatest swordfights in motion picture history. It rivals SWORD OF DOOM in its intensity and duration. ICHIKAWA Raizo’s fighting in this film is far and away the best of his career. Betrayed by the elders of his clan, and blamed for a murder he did not commit, his unrelenting fury against those who falsely accused him comes to one of the most exciting conclusions ever filmed!Newly re-mastered from a stunning anamorphic print, this amazing film is now enhanced for widescreen (16:9) TV's with removable subtitles and a fully subtitled theatrical trailer. One of the unknown gems of Japanese Cinema. Remarkable action and a great story from the library of Daiei Films.