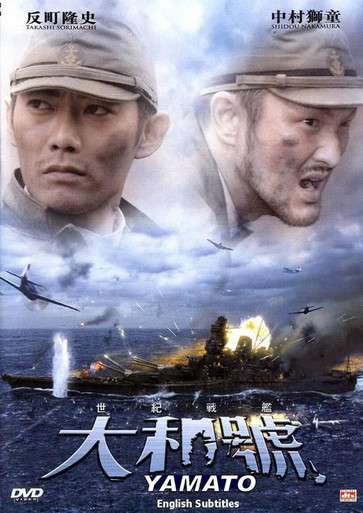 BATTLESHIP YAMATOSister ship to Musashi, the Yamato was one of the most powerful warships ever built.
Starring: NAKADAI TatsuyaTold in flashback as a survivor (Nakadai) recalls his experiences aboard the giant battleship.Comes with a bonus 'making of' disc with English subtitles.

Yamato (??), named after the ancient Japanese Yamato Province, was the lead ship of the Yamato class of battleships that served with the Imperial Japanese Navy during World War II. She and her sister ship, Musashi, "were the largest and most powerful battleships ever built",[8] displacing 72,800 tonnes at full load and armed with nine 46 cm (18.1 inch) main guns. Neither survived the war.

Laid down in 1937 and formally commissioned in late 1941, Yamato was designed to counter the numerically superior battleship fleet of the United States, Japan's main rival in the Pacific. Throughout 1942 she served as the flagship of the Japanese Combined Fleet, and in June 1942 Admiral Isoroku Yamamoto directed the fleet from her bridge during the disastrous Battle of Midway. Musashi took over as the Combined Fleet flagship in early 1943, and Yamato spent the rest of the year, and much of 1944, moving between the major Japanese naval bases of Truk and Kure in response to American threats. Although she was present at the Battle of the Philippine Sea in June 1944, Yamato played no part in the battle. The only time she fired her main guns at enemy surface targets was in October 1944, when she was sent to engage American forces invading the Philippines during the Battle of Leyte Gulf. On the verge of success the Japanese force turned back, believing they were engaging an entire US carrier fleet rather than the light escort carrier group that was all that stood between Yamato and the vulnerable troop transports.

During 1944 the balance of naval power in the Pacific decisively turned against Japan, and by early 1945 the Japanese fleet was much depleted and critically short of fuel stocks in the home islands, limiting its usefulness. In April 1945, in a desperate attempt to slow the Allied advance, Yamato was dispatched on a one-way voyage to Okinawa, where it was intended that she should protect the island from invasion and fight until destroyed. Her task force was spotted south of Kyushu by US submarines and aircraft, and on 7 April she was sunk by American carrier-based bombers and torpedo bombers with the loss of most of her crew.