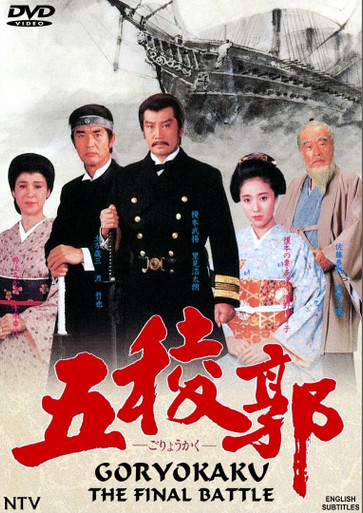 and TSUGAWA Masahiko as KATSU Kaishu

After the fall of the Tokugawa Shogunate, there was a series of battles fought while the former supporters of the Tokugawa shogunate retreated to the north where they actually started a sovereign nation that was recognized by more than one European country. Survivors of the Shinsengumi were among the followers of Enomoto Takeaki who took them to the northernmost island of Ezo where they fought their final battle at the star shaped fort, Goryokaku. The Japanese Civil Wars fought in the name of the emperor signaled the complete end of the feudal system and Japan’s entry into the modern world as those brave samurai tried to halt progress and learned that the age of modern warfare and weaponry had passed them by. Swords were no match for rifles and cannons, nor was any man a match for the power of the imperial flag. Japanese loyalty to the emperor has long defined the nation and culture despite the changing times.