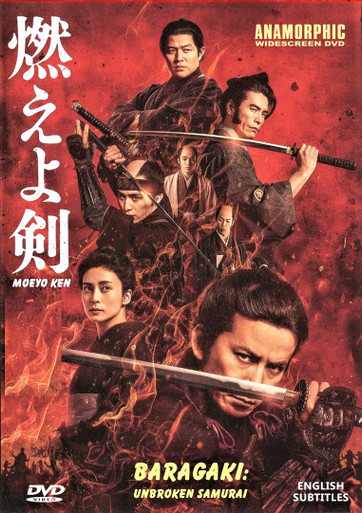 and ITO Hideaki as SERIZAWA Kamo

The greatest movie in the last 40+ years, this is the film everyone has been waiting to see!

Based on the serialized Shiba Ryotaro story, dramatizing the life and times of Hijikata Toshizo from his earliest days as a young man learning swordsmanship, then on to his joining the Shinsengumi patrol group which helped support the Tokugawa shogunate towards the end of the samurai era. Following in the tradition of his other historical writings, this is the most accurate representation of that group, and above all, the tremendous swordsman that Hijikata was. Starting out as a rural samurai, Hijikata, along with his sword master Kondo Isami and dojo brother Okita Soji head to Edo and eventually wind up in Kyoto where they work to prevent the overthrow of the shogunate. Earning the nickname “Wolves of Mibu” with their brutal tactics highlighted by ultra-violent swordplay from start to finish, this is the essence of what makes samurai cinema so great. Do not miss out on this extraordinary motion picture!

Baragaki : Unbroken Samurai 2021 (English Sub) This is a Shinsengumi movie I translated for samuraidvd.com in July 2022. The Japanese title for this film is Moeyo Ken. If you love Shinsgengumi or good action samurai video, this is a movie for you. This film is packed with action scenes featuring choreographies by OKADA Junichi. You will learn so much about Japanese history and political structure of the Bakumatsu period, while the action scenes of the Ikedaya incident, the battle of Toba-Fushimi, and more amazing sword-fighting scenes outside of those big battles will keep you engaged. The casting and acting were both superb. My favorites are Soji-kun, Gen-san, and Yamazaki-kun. Most of the movie is serious, but there are some funny scenes there that made me laugh out loud. Baragaki: Unbroken Samurai 2021 (English Sub): https://samuraidvd.com/baragaki-unbroken-samurai/ Translation Service: myjapanesenameplus.com/contact Custom Japanese Name Art Service: https://myjapanesenameplus.com/product/custom-name-art-in-japanese-katakana/ Baragaki: Unbroken Samurai 2021 (English Sub): https://samuraidvd.com/baragaki-unbroken-samurai/