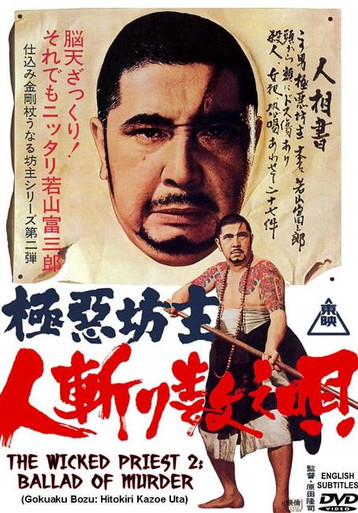 The long awaited second film in the Wicked Priest series is a masterpiece of sword swinging fury as Shinkai is asked by a man on the run to bring his young son to live with his grandfather, the master of a ju-jitsu dojo during the Taisho period of the early 20th century. Shinkai then runs afoul of a gangster group using strong-arm tactics to take over the profits from local gambling. When he proves to be more than they can handle, they hire the one man who has the ability to kill Shinkai and exact revenge, Ryotatsu, the karate priest whom Shinkai blinded in the first film. This ultra-violent entry has long been considered the best movie in the series and never made its way to home video before. See a spectacular display of Wakayama Tomisaburo’s martial art expertise in this action packed film. The Holy Grail of sword movies has arrived at last!