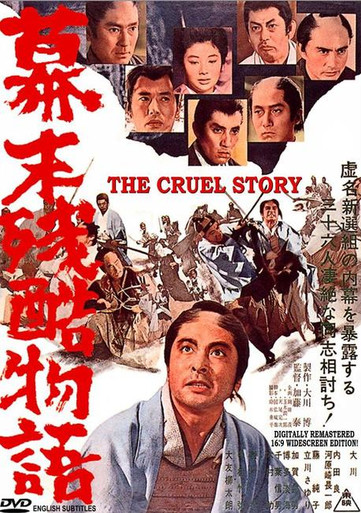 THE CRUEL STORY
A story of the cruel final days of the Tokugawa Shogunate
1964 - b&w - 99 min  REMASTERED Anamorphic Widescreen (16:9)
Starring: OKAWA Hashizo, OTOMO Ryutaro, FUJI Junko
Directed by: KATO Tai
This is one of the bloodiest black and white films from the mid-sixties. This film tell the brutal story of a young recruit to the Shinsengumi, the para-military force of ronin led by Kondo Isami, and made famous to the west in Sword of Doom. This is another view of that group without the usual whitewashing of their character. The full translation of the title tells it all. A Cruel Story set during the fall of the Tokugawa Shogunate. It's a powerful indictment of the brutality going on in Japan at the time in the name of keeping the West out of the country. Finally re-mastered from a new superior anamorphic widescreen print with improved subtitles and theatrical trailer, it is a superb motion picture that is not to be missed.