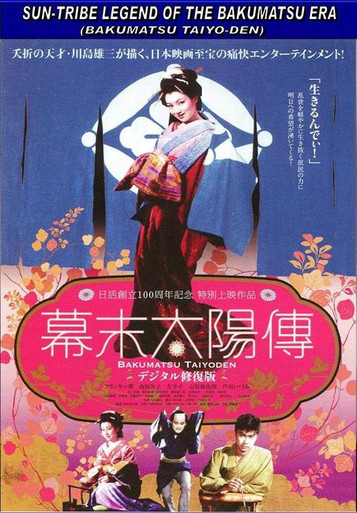 SUN-TRIBE LEGEND OF THE BAKUMATSU ERA

The sensational classic long considered one of the greatest Japanese films of all time, available in the US for the first time.

During the Bakumatsu era (final days of the Tokugawa Shogunate) a group of samurai plot to kill all foreigners who they feel are spoiling Japan, while at the same time Saheiji tries to outwit the inhabitants of a brothel in order to survive in difficult times.  Considered by Japanese film critics to be one of the top 5 movies of all time, this is a brilliant mixture of comedy and violence that is not to be missed.  Nikkatsu Films was the first motion picture company in Japan, and after being discontinued for much of the 20th century, they had recently begun filming again.  This is considered their greatest effort, blending the concepts of the “Sun-tribe” youth of the 1950’s, with the serious nature of the samurai era.