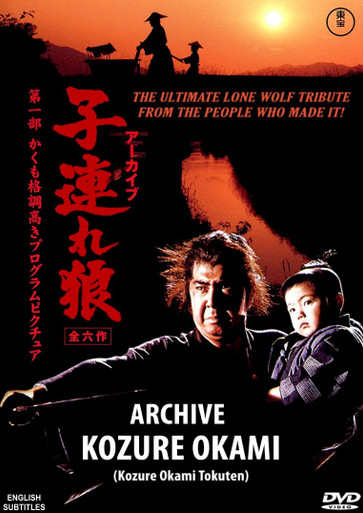 This series of interviews with the filmmakers who worked on the 6 Baby Cart movies tells the stories behind the story, as they recount what led up to, and how they created the greatest film series in movie history.  From the first interview with original author Koike Kazuo through the behind the scenes journey told by half a dozen noted staff members this specially produced DVD is essential viewing for anyone with an interest in samurai movies at their zenith.  Starting with the first meeting that original manga author Koike Kazuo had with Wakayama Tomisaburo and never letting up as other notables including director Saito Buichi, producer Sanada Masanori, stunt choreographer Shishido Daizen, cinematographer Morita Fujio, sound recordist Hayashi Tsuchitaro, screenwriter Nakamura Tsutomu, and the real life son of Lone Wolf, Wakayama Kiichiro share their wealth of knowledge. And to top it off, part 2 contains a short film produced, directed by, and starring Wakayama Kiichiro that pays the ultimate tribute to his legendary father!

Here is what noted Japanese film expert Dan Richard had to say about Kozure Okami Archives:

I just finished watching the Archive documentaries. You did a spectacular job on this. I can see why it was so difficult to do. This has to be the most subtitles I've ever seen on anything. They speak non-stop and there's also tons of on-screen information. Monumental task but as usual you knocked it out of the park.

Comparing these to the docs on the Criterion blu-ray disc the first part of the Archive doc covers much of the same thing as the "L'ame d'un pere, l'ame d'un sabre" one (but the Archive one is better). I guess because of the similarities though, they didn't bother to include it, but they really dropped the ball not getting Archive Part 2, which although much shorter, is the real gem as it focuses on Wakayama, his incredible sword skills, his relationship with his brother, and features interviews with his son and that cool short "Kozure Okami Eclipse" he did as a tribute.

Thankfully though, you once again came to the rescue and fans can now also have these great documentaries that Criterion didn't include in their set.

This is a must get for all "Lone Wolf and Cub" fans.