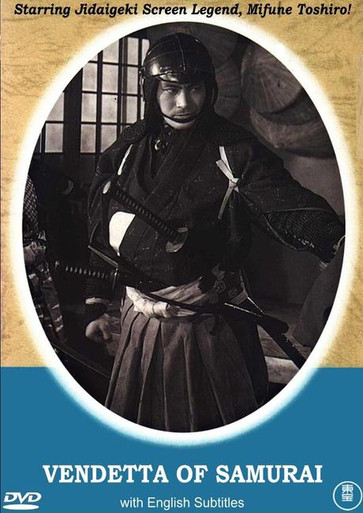 The famous showdown at Kagiya corner has been told many times, but never before with the realism and intensity of this version scripted by Kurosawa Akira and starring Mifune Toshiro as the famed swordsman who must face his best friend as they are forced to take opposite sides in a vendetta caused by the murder of a family member.  Told mostly in flashback as the avengers await the arrival of their quarry, this film displays true heroism in the face of fear as most of the combatants, while of the samurai class are not skilled swordsmen. They contrast sharply with the true warriors involved in this battle. Araki Mataemon (Mifune), who was not only a direct student of Yagyu Munenori, but the founder of his own sword style under the Yagyu name is a powerful force ready to assist his brother-in-law against the murderer's allies that include not only another noted sword teacher, but the deadly spear of Katsumi no Hanbei.