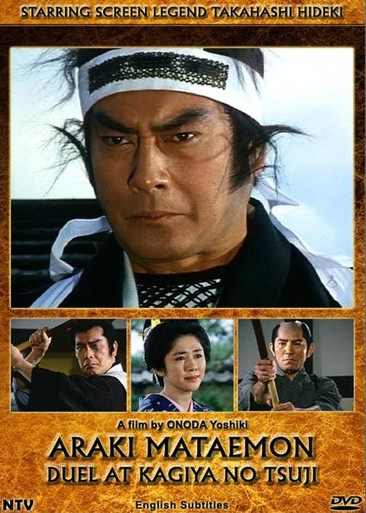 ARAKI MATAEMON-DUEL AT KAGIYA NO TSUJI(Ketto Kagiya no Tsuji Araki Mataemon)Courtesy of Ichiban1993 - color - Nippon TV - 92 min. - Academy Standard (4:3) Starring: TAKAHASHI HidekiNATSUYAGI IsaoDirected by: ONADA Yoshiki
The famous duel at Kagiya Corners has been portrayed many times, but never before like this. In the ultimate film version starring Takahashi Hideki as master swordsman Araki Mataemon, the story unfolds with some unique twists such as Mataemon’s fear of horses, having been kicked by one as a child. Undaunted, he must face his best friend, another superb swordsman played by Natsuyagi Isao to clear a path for family member Watanabe Kazuma to avenge the brutal murder of his brother. The vendetta is first denied as the Japanese law in the 17th Century only allowed a samurai to avenge his father or older brother, not a younger brother. The tension mounts as they must carry out the vengeance before the murderer Kawai Matagoro reaches the safety of a direct retainer of the shogun.