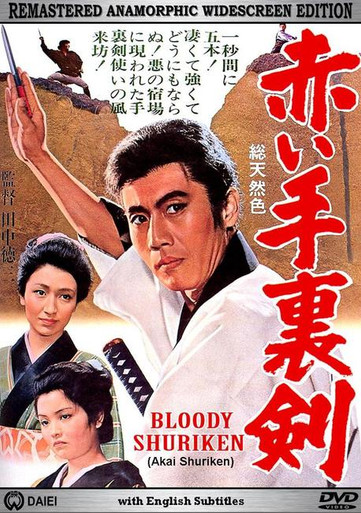 Japanese super-star Ichikawa Raizo stars as Ibuki Shinnosuke, a master knife thrower whose signature red-handled knives leave a bloody trail wherever he travels.  Arriving in the lawless town of Shukuba, where three families, the Sumiya, Hotoke, and Kanzo are competing to rule the area, he is hired as a bodyguard by Sumiya.  In response, the other two hire assassins with the intent of killing Ibuki and taking over the town.  Structured somewhat like a Spaghetti Western this tale of violence, romance, and betrayal is a true classic.  Long awaited by Raizo fans across the globe, this is Ichikawa Raizo at the peak of his career!