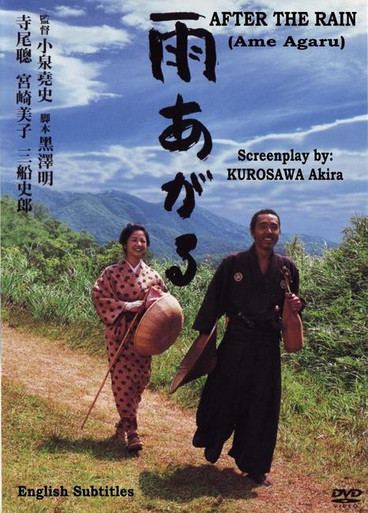 AFTER THE RAIN (Ame Agaru)

The great master of Japanese cinema, KUROSAWA Akira wrote the screenplay for this wonderful movie shortly before he died.  From a classic story by novelist YAMAMOTO Shugoro, this is the story of Misawa Ihei, a masterless samurai and his wife Tayo as they get stuck at a riverside inn waiting for the rains to subside so they can cross the river.  Ihei’s exceptional sword skills turn out to be both a benefit and a bane as he attempts to become the sword instructor for Lord Shigeaki, played by MIFUNE Shiro, (son of Toshiro).  With equal touches of humor, sadness and brilliant swordplay this is one of the best films to come out of Japan in the last 20 years.