A TALE OF THE SHINSENGUMI - SIGNAL FIRE OF REVOLUTION 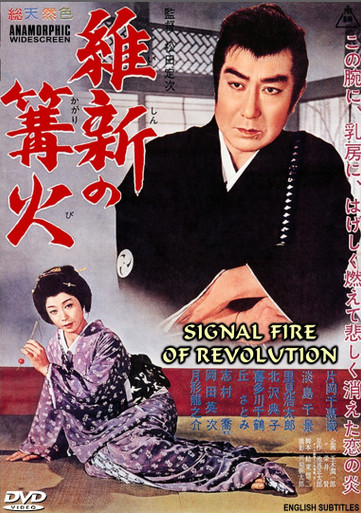 A TALE OF THE SHINSENGUMI - SIGNAL FIRE OF REVOLUTION

and TSUKIGATA Ryunosuke as KONDO Isami

From the pen of award winning author Ikenami Shotaro (Bandit Vs. Samurai, Hunter in the Dark, Misumi's The Last Samurai)

Megastar Kataoka Chiezo is Vice-commander Hijikata Toshizo of the Shinsengumi in this realistic tale of Japan’s inner battles that led to the downfall of the Tokugawa shogunate. Excellent performances and extremely good swordplay highlight this glimpse into the heart and soul of Japanese history. Although known as “Razor Blade” Hijikata, the vice-commander is a man of deep conviction with a little-known sense of humanity. Starting after the famed Ikedaya Incident, in which they saved Kyoto from Choshu’s plot to burn the city to ashes, they work hard to change the public’s view of them as merciless killers to their true mission of protecting the shogun. This is an extraordinary tale of blood and guts!