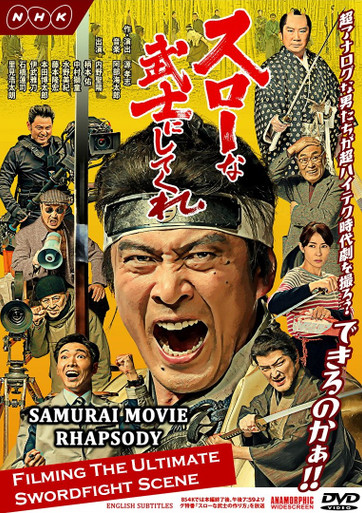 And SATOMI Kotaro as Himself

This is a “Movie in a Movie” like no other ever before. Kyoei, a historical film studio in Kyoto (Modeled on Toei), is asked by NHK to make a new samurai era program using the most advanced technology. While the elderly filmmakers at Kyoei are struggling with the high-tech equipment, their skills at creating choreographed sword battles are undiminished. The NHK project will dramatize the Ikedaya incident, which was a raid launched by the Shinsengumi against Imperial loyalists gathered at an inn called Ikedaya in Kyoto during the twilight years of the Tokugawa shogunate. A series of problems occur and the climax they reach after overcoming difficulties is an unprecedented attempt at a 360° one-cut scene involving the world’s most advanced high-speed camera and wire action for a scene where Kondo Isami will fall down the stairs at Ikedaya. Can they succeed in filming the single greatest swordfight scene in samurai movie history?!?