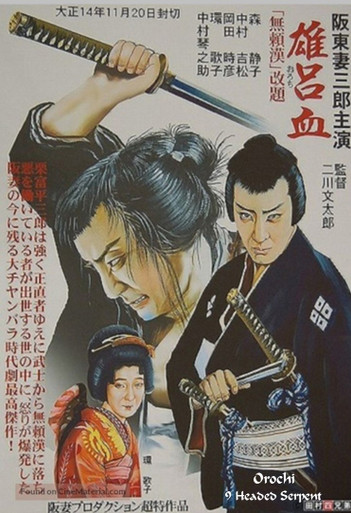 Orochi starts and ends with the narrator explaining how not every villain is completely evil and not all noblemen are worthy of the name. The film explores the grey area of morality and how nothing is as simple as we would like it to be. Kuritomi Heisaburo (Bandō) is disgraced after not accepting a drink from a superior, which starts a fight, and no one takes his side. Bit by bit his social standing is ruined through a series of unfortunate events that mostly aren’t his fault. Heisaburo takes the blame for everything and ends up going to jail. The film gets very dark at points, where Heisaburo starts to act like the villain he’s been labelled as. The best moment of the film is the long fight sequence towards the end where Bandō Tsumasaburō gets to show his full skill as a swordsman.