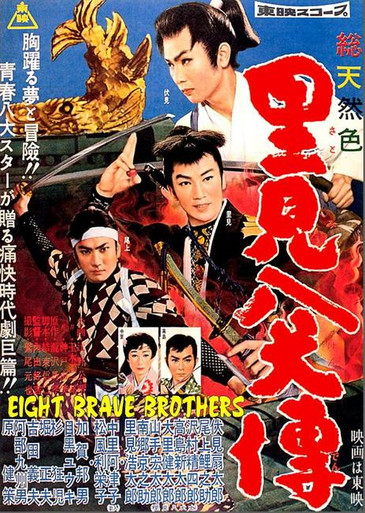 The most popular version of the Satomi Hakkenden, a brilliant fantasy from Japanese legends.

This remake of Satomi Hakkenden is the most requested of all Toei movies and features some of the greatest special effects ever filmed. Set in the mountains of Awa Province, a monster bat from the heavens, a monster eagle from the clouds, a killer amphibian man, and a fire-breathing monster serpent! Mean-while being protected by the black magic of two sorceresses, the army of Ogigayatsu Sadamasa surges on! Young Satomi Yoshimichi stands up to the onslaught in defense of peace and happiness. As incarnates of the loyal family canine Yatsufusa, eight young warriors are bound by eight mystical beads of virtue. These are the adventures of eight warrior brothers, Satomi Hakkenden!