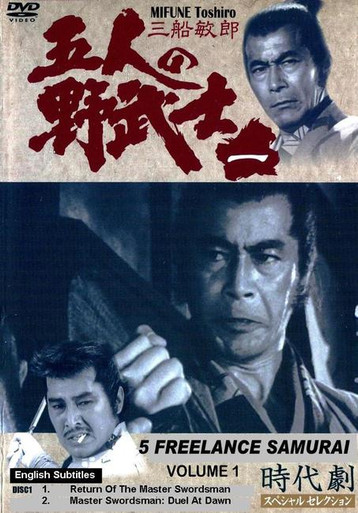 Gonin no Nobushi Vol. 011968 - 96 min. - b&w - Remastered Academy Standard (4:3)Starring: MIFUNE Toshiro as a master swordsman who takes on 4 roving warriors in his quest for revenge.
1. RETURN OF THE MASTER SWORDSMAN2. MASTER SWORDSMAN-DUEL AT DAWN

In 1560, during the Warring States Era in Japan, a master swordsman returns to his place of birth on a mission to take revenge for the brutal slaughter of his family by the most ambitious warlord in the region.  Mifune Toshiro stars in this powerful TV series as the leader of a group of “Nobushi” (Freelance Samurai) who travel about the country righting wrongs and standing up for those oppressed by the unscrupulous leaders who each want to rule the entire nation. Produced by and starring the peerless Mifune Toshiro!