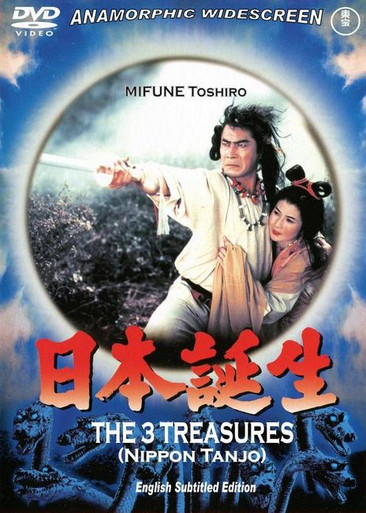 The adventures of legendary Prince Yamato and the birth of Japan!
The masterpiece from filmmaker Inagaki Hiroshi.

This well-wrought, visually stunning tale from Japanese mythology directed by INAGAKI Hiroshi relates the adventures of a legendary Prince Yamato Takeru (MIFUNE Toshiro)  The reason for those adventures is linked to the creation and/or discovery of the "three treasures" basic to the Shinto religion and the mythic origins of Japan (Yamato) and her emperors. These "three treasures" are a comma-shaped jewel, a mirror, and a sword. As the Prince goes about slaying dragons and surviving all manner of natural disasters -- earthquakes, volcanoes, floods -- the heroic stories of how Japan and its imperial family came into being are told in epic style.