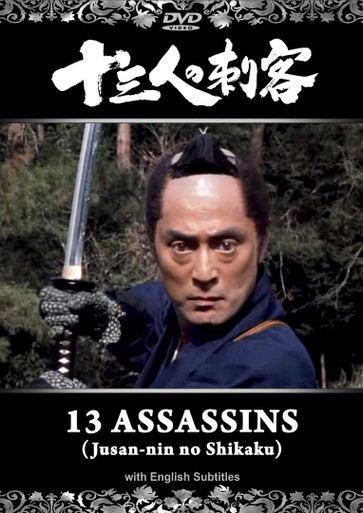 In between the original 1963 13 ASSASSINS film and the 2010 remake by Miike Takashi, Fuji TV produced a vastly superior version to both. Starring Nakadai Tatsuya and Natsuyagi Isao, with strong support from Tanba Tetsuro and Tanaka Ken, this is the ultimate tale of samurai justice carried out in an historical masterpiece. The shogun’s half-brother, Matsudaira Naritsugu has been slated to join the Roju Council of Elders as a senior adviser even though he is criminally insane. His outrageous acts cause one of his top retainers to commit ritual suicide in protest over his lord’s crimes. Alerted to these crimes, Roju Councilor Doi asks Inspector General Shmada Shinzaemon to assassinate Naritsugu before he can be seated on the council. Gathering a band of 13 (including himself), Shimada sets out on a death-defying journey to cut down the lord before he can reach Edo. Can a band of 13 samurai defeat the vile Naritsugu’s 200 man entourage and enact justice against his cruelty?